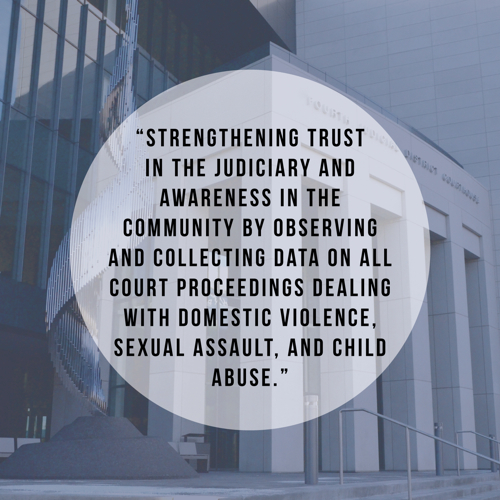 CourtWatch, an extension of the Utah Coalition Against Sexual Assault (UCASA), is a data-driven pilot program which launched on April 1, 2019 in Provo.

Court Watch arose out of a desire to bring more public awareness to Utah’s incidence rates of domestic violence, sexual assault, and child abuse--all of which exceed national averages. To this end, a large force of trained CourtWatch volunteers observe and collect data on all court proceedings concerning these sensitive issues at both the 4th District Court and the Provo Justice Court. CourtWatch then compiles and analyzes the collected data. In an effort to bridge the judiciary and the community, CourtWatch, as a neutral third party, will release findings celebrating what the courts are doing well and highlighting areas of potential improvement.

Our hope is that through these efforts, members of the community will understand how domestic violence, sexual assault, and child abuse cases move through the judicial system; be aware of implicit biases that they may hold or which may exist around them; and be prepared to further engage with these issues in their communities.