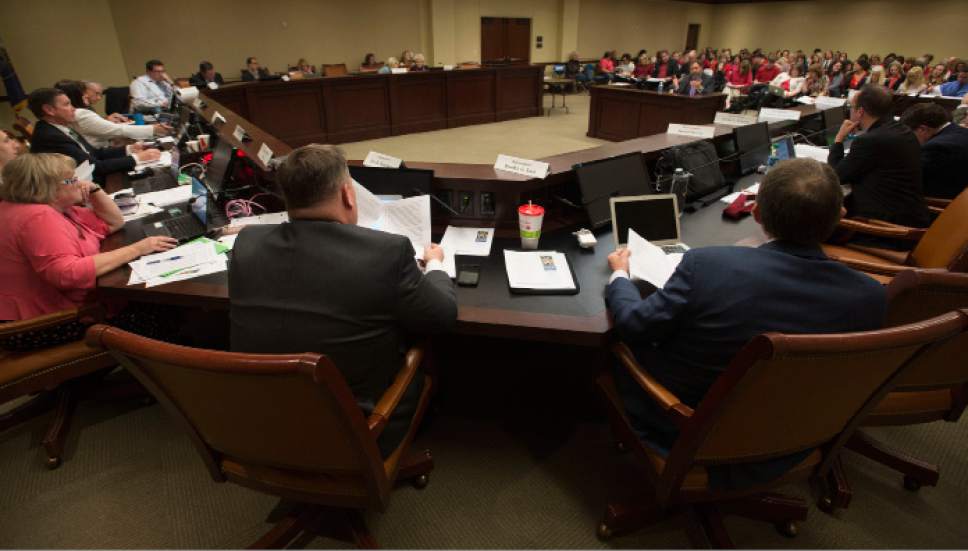 Utah schools will continue to teach an abstinence-based sexual education curriculum after a bill to allow comprehensive instruction was defeated in committee.

The committee also declined to vote on a bill by Rep. Keven Stratton, R-Orem, that would have allowed schools to determine whether prior consent of a parent should be required for children to participate in a new abuse prevention course.

Students are currently enrolled in those courses by default, with parents allowed to remove their child by notifying the school. Without a committee vote, the bill is significantly less likely to advance through the Legislature.

Critics said the current opt-out requirement is necessary to include students in abusive situations who might otherwise be kept from receiving information.

"The opt in doesn't take into account that the abuser might be in their home," said Rep. Carol Spackman Moss, D-Holladay. "I think this puts children at risk."

Monday's committee hearing, which lasted for more than four hours due to significant public interest, was a near-replica of a similar proceeding last year.

On Feb. 23, 2016, the House Education Committee voted 11-2 along party lines to defeat a comprehensive sex education bill by King, and it adjourned without voting on a bill by Stratton to require prior consent for abuse-prevention courses.

But both sponsors adjusted their proposals this year in an attempt to reach consensus.

Rather than require an opt-in format, Stratton changed his bill, HB137, to allow schools to select enrollment structure for their abuse prevention courses. And instead of applying a comprehensive sex-education curriculum statewide, King's HB215 would have allowed for both abstinence-based and comprehensive programs, with parents able to select the option — or neither — for their child.

King said the bill was necessary to lessen rates of teen pregnancy and transmission of infections, as well as to educate Utahns about consent and assault. His bill specified that parental notices be printed in at least 14-point font, to ensure that families were aware what their children would be taught at school.

"I believe that if our kids are empowered with education and knowledge about these things," King said, "they're more likely to recognize warning signs."

Laureen Simper of the United Women's Forum said the intricacies of sexual relationships are best left to conversations between parents and their children.

"I have to wonder if this is the proper role of government," Simper said.

But Lauren Hunt, a Utah County prosecutor, said the rate of sexual violence in the state points to a lack of knowledge on issues of healthy sexuality.

She referred to a case in which a young girl allegedly had been raped by an acquaintance, but the defendant was acquitted in part because the jury did not believe an assault by an acquaintance could constitute rape.

"These potential jurors are also the parents who are supposed to be teaching our students," Hunt said.

Turner Bitton, executive director of the Utah Coalition Against Sexual Assault, said his organization works with sexual assault victims who are unable or unwilling to say the word "vagina," and who don't recognize their experiences as assault.

"That is the legacy of our failed abstinence-plus system," he said.

Several members of the committee thanked King for his work, and stressed the need for updates and revisions to Utah's sex-education statute.

Rep. Francis Gibson, R-Mapleton, said the bill had merit, but he could not vote in favor, in part due to concern about maintaining a high standard of instruction statewide.

"Let's not put our heads in the sand and think we don't have a problem," Gibson said.

Debate over Stratton's bill focused on the potential for children to be excluded from abuse-prevention training, either due to a parent's obstruction or to schools declining to offer the course.

Many districts were late to implement the nascent program, Stratton said, and providing flexibility to choose an opt-out or opt-in model might facilitate more schools' participation.

"Most school districts have chosen not to adopt it," Stratton said. "By adding an additional opportunity, our coverage of the curriculum is going to be much broader."

He also stressed the need for parents to be included in conversations about sexual abuse, and he argued that requiring parental consent in advance would amplify that engagement.

"We can't legislate parental involvement," Stratton said. "But we can take action to do all we can to encourage it."

Community activist Pamela Atkinson spoke against the bill. She said many parents are unable to educate their children about consent and healthy relationships, and that they rely on the school system for support.

"They are more concerned about putting food on the table and having a roof over their head," Atkinson said. "This isn't something they feel they have to do."

Utah has always been an opt-in state, Ruzicka said, and that standard should be applied to abuse-prevention training.

"I think only parents can decide what is age appropriate," Ruzicka said.

But committee members questioned the wisdom of making it easier for abusive parents, guardians or relative to exclude children from receiving the kind of information that would help them recognize abuse.

"Where is the safety net for that child if this is passed?" Snow said.

The committee voted to move ahead to the next agenda item, King's bill, without a vote. Stratton's bill remains in the House Education Committee, and its further consideration is at the discretion of the committee chairman.

This piece originally appeared in The Salt Lake Tribune. Click here to read the original article.