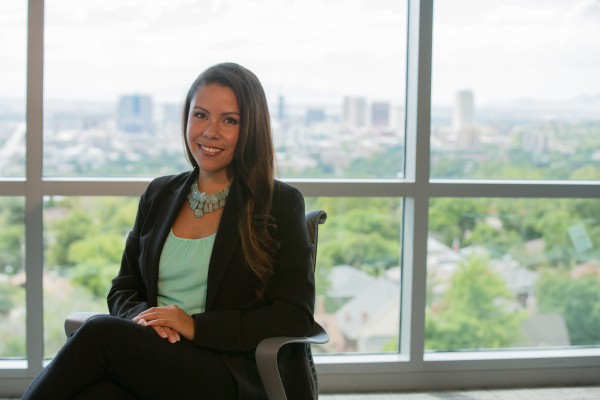 Newswise — (May 12, 2016) —Nubia Peña grew up as the daughter of a single parent in Philadelphia, watching as her mother worked several jobs to provide for their family of five. As a young immigrant from Mexico adjusting to life in the U.S., Peña knew a path to success wasn’t going to be easy in her early years, but that didn’t stop her from eventually moving to Utah where this week she’ll become one of 122 students to graduate from the S.J. Quinney College of Law at the University of Utah.

A standout student, Peña was recently named as one of the top 25 law students in the country by National Jurist magazine for her commitment to social justice, empowering marginalized communities, and developing new young leaders of color.

“In many ways, I could have followed a path that was not one of excellence, triumph, or success. I could have become another statistic and failed to ever accomplish anything of great significance. I was, however, blessed with a mother who served as a phenomenal example of kindness, compassion, and service to those in need. She taught me the value of a strong work ethic and instilled in me a desire to advocate for those with less and to give my life to serving a meaningful and greater purpose,” said Peña, who will be recognized at Friday’s graduation ceremony, which takes place from 10 a.m. to noon at Kingsbury Hall, 1395 East Presidents Circle, Salt Lake City.

“The varied experiences of my personal and professional life, coupled with my spiritual foundation to serve the underserved, have shaped and defined who I am. This has led me to pursue a legal career in hopes of further developing my capacity as a human rights activist that advocates for marginalized communities,” she said.

In addition to the prestigious recognition from National Jurist magazine that will be noted in Friday’s graduation ceremony, Peña’s academic career includes being named a Carnegie Ethics Fellow for the Future, being selected for the Oxford Consortium for Human Rights Fellowship, earning top honors in the Carnegie Trans-Pacific Student Essay Contest, receiving the Equal Justice Works Public Interest Award and the NAACP Mahatma Gandhi Social Justice Award as well as several other leadership awards and scholarships as part of the U law school’s class of 2016.

She was a contributing author of a report issued by the law school’s Public Policy Clinic, titled “From Fingerpaints to Fingerprints: The School-to-Prison Pipeline in Utah,” which examined school discipline rates in Utah on a broad level. It found, through U.S. Department of Education data, that there are higher discipline rates for Utah’s students of color and students with disabilities, which makes them less likely to graduate high school and succeed later in life.  The report received national media attention, and in its aftermath, law students collaborated with community partners and organized several initiatives —including a symposium — to try to shed light on the issue. As a result of the report, Rep. Sandra Hollins, D-Salt Lake City, successfully introduced legislation aimed at addressing the school-to-prison pipeline in Utah.

Peña worked to organize several events on the University of Utah campus that brought attention to the issue of human trafficking. She also participated in developing a new set of recommendations aimed at better protecting migrant women from domestic violence and sexual assault. The report she worked on with other researchers from the law school, “Prevention and Protection Partnerships: Empowerment Through Rights Education,” explores the vulnerabilities and barriers to access to legal services that migrant women face when trying to leave violent situations.

Peña was selected as one of top 25 law students in the country by National Jurist because of her expansive achievements in the social justice field, but also because of her “warmth, wisdom and inclusive spirit that distinguishes her from more traditional leaders,” according to Leah Farrell, a staff attorney at the ACLU of Utah who nominated Peña for the award along with Anna Brower at the ACLU. She mentored youth offenders and worked on other youth leadership initiatives during her time at the law school.

“She truly cares about the success of others, and moves ahead with her own accomplishments in a deliberate manner that brings others toward positive achievements along with her,” Farrell and Brower said of Peña in a letter.

“While maintaining a strong academic performance and working at both the ACLU of Utah and the Utah Coalition Against Sexual Assault, Ms. Peña nonetheless finds time to mentor other law students, as well as undergraduate and high school students. She tirelessly offers herself up to others as an example of what committed and caring young leaders can accomplish - regardless of the many discouraging barriers thrown in their way by systemic racism, sexism and classism,” Farrell and Brower wrote.

Peña’s path to law school began in a prior career as an advocate for survivors of domestic abuse, sexual assault, and violent crimes. She realized that issues relating to disenfranchised populations would often fall to the wayside if someone were not readily advocating on their behalf. As an activist, organizer, and educator in the anti-violence movement, she had a desire to influence change within institutions that would benefit marginalized populations.

“Working closely with survivors of violent crimes, specifically crimes against women and children who often had to flee their homes in order to escape the abuse, inspired an immense desire to advocate for victim rights in the criminal justice system. At the time, attending the criminal proceedings with the survivor, often left me feeling as if the system could have better addressed the voice of those most impacted by the crimes perpetrated. Later, as I started to expand my advocacy efforts to include racial and economic justice and immigration rights, I realized that obtaining a law degree would provide me with a framework to challenge unjust policies and practices. Having a historical, theoretical, and practical understanding of our laws and the evolution of the human rights discourse, has granted me the ability to critically analyze policies that disproportionately impact vulnerable communities and speak out against them.
I also felt that as a racially diverse attorney, I could inspire others in the legal field to better address the unique concerns compounded by intersecting identities such as race, gender, class, religion, and sexual orientation. This would encourage us as legal practitioners to have a more holistic approach to justice,” Peña said.

She said her experiences at the S.J. Quinney College of Law —and several mentors she learned from —will help her on her path forward. She cites her selection by the U’s Global Law Program in March of 2015 to attend the Human Rights Consortium at Oxford University in London as a highlight of her time at the law school. There, she spent time studying Just War and Just Peace theories, which allowed her to better understand the ethics of war, or lack of, and the value of life that is determined by those in power who justify human collateral.

Peña has also been a standout part of the law school’s Pro Bono Initiative, where she was able to provide support to low-income clients. Her first summer at the law school included providing 65 hours of pro bono translation and interpreting services with Ballard Spahr’s U-Visa program, where she advocated for undocumented victims of domestic violence and sexual abuse.  She also worked as a prosecutor through the law school’s criminal legal clinic, where she had the opportunity to prosecute several types of cases in Salt Lake County from traffic, possession, to domestic assaults.

“I have been incredibly fortunate with the various opportunities S.J. Quinney provided me during these three years,” said Peña. “During my law school experience at the S.J. Quinney College of Law, I have been mentored and supported by faculty and staff who believe in assisting the underserved, giving voice to injustice, and considering global citizenship instead of an isolated focus within our borders. It was in those spaces that I felt most prepared to follow a path of social justice lawyering.”

She said she’s excited about what’s next following graduation, and hopes to one day become a prosecutor specializing in sexual assault cases as well as a professor —and perhaps one day, an elected official.

“Since I am graduating, the question of “what is next?” is often asked and I have lovingly responded in the same way each time, “I want to make a difference.” I recognize that this may seem evasive, a bit unconventional, or even borderline idealistic, but I truly believe that regardless of my job title, I want to create solutions and improve practices that better fit the unique needs of the diverse and multifaceted community we exist in,” said Pena. “ I do not believe there is only one path that will allow me to do this, which is why I am considering several opportunities that have their own rewards and benefits for a passionate activist seeking to serve a greater purpose.”

This piece originally appeared on newswise.com. Click here to read the original article.