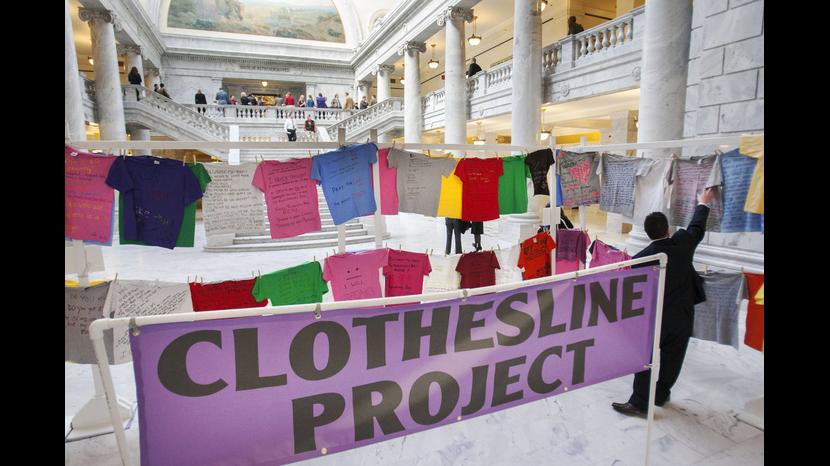 Some featured words as colorful as the shirts, while others expressed messages of hope. Each of the messages were written by victims of sexual violence or domestic abuse. They were on display as part of the Clothesline Project, a nationwide effort to increase awareness of the impact of violence against women.

"Half a heart of love is stronger than all eight of your hate-filled hearts. I choose love," one shirt read.

"I never thought it would happen to me. It did," another read. "These problems are real. Silence is your enemy. Talking is your medicine."

According to the Utah Department of Health, 1 in 3 Utah women will experience sexual assault in her lifetime, and 1 in 8 will be raped.

Rapes reported to Utah law enforcement increased by 10 percent from 2011 to 2012, said Alana Kindness, executive director of the Utah Coalition Against Sexual Assault, in the "Utah Department of Public Safety: Crime in Utah" report for 2012.

The Clothesline Project is another opportunity for victims to come forward and share their story.

"A really important piece of this is for other survivors to see the stories of those who have continued to move on and through it and thrive in their lives," Kindness said.

One of the most difficult aspects of abuse is the shame with which victims are left, she said. Seeing victims' shirts side by side "helps them know they're not alone, but also that they don't have to be ashamed," Kindness said.

Dozens of Utah's chiefs of police also gathered in the Capitol rotunda Monday for a luncheon. Kindness said having the nonprofit community together with law enforcement, lawmakers and the voices of survivors "helps make the connection that everybody has a role to play in ending sexual violence."

Woods Cross Police Chief Greg Butler said the luncheon is an opportunity to hear from other police departments, discuss worthy causes and make sure state lawmakers are aware of their top priorities.

"It's always great for law enforcement to see what's going on out there and seeing a different side," Butler said of the voices represented on T-shirts.

Many of the shirts on display were donated by the Utah Valley University Equity in Education Center, which held a Clothesline Project event in October.

Lujean Marshall, project leader at the center, said hundreds of shirts are made each year.

"We don't censor them, which is why some of the wording is very, very graphic," she said. "These people are in different stages of recovery, so if they're still in the anger phase, it's going to be really intense."

Marshall said one of her favorite shirts depicts a set of eyes peering out from the darkness with the words, "For everything bad that happens, something better rises."

Below the words, a pink flower is rising up from the ground.

"There are things that can be done," Marshall said. "It has to start with awareness in the community. There's a lot more of it going on than anybody realizes."

Kindness said the coalition is also hoping for the support of $150,000 in ongoing funding for sexual assault services proposed in the governor's budget.

This piece originally appeared in the Deseret News. Click here to read the original article.