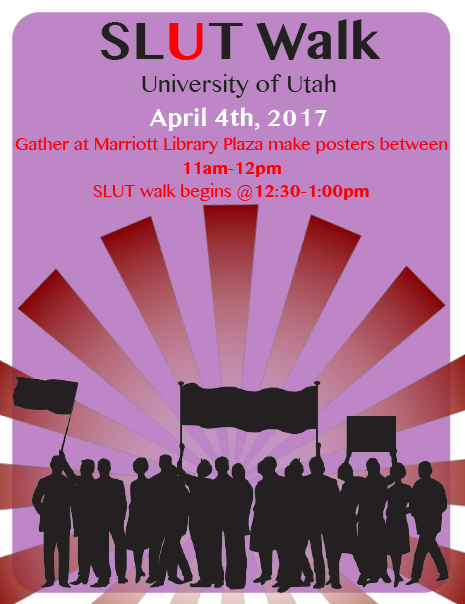 Through a course being offered by the University of Utah, a number of students have spent the semester planning and organizing action against sexual assault. On Tuesday, April 4, they will host a “SlutWalk” on campus to bring awareness to the issue as it relates to women.

SlutWalks are part of a global movement of women’s activism that began after a Toronto Police officer said that women could prevent sexual assaults by “avoid[ing] dressing like sluts.” This remark led to widespread outrage and protest. SlutWalk participants are encouraged to dress however they deem fit, be it in underwear, a skimpy dress or a swimsuit.

Students in “Social Movements,” a sociology course taught by associate professor Wade Cole, have worked alongside community groups, including the Road Home and Women’s Resource Center, to plan a march that they hope will empower women and men to challenge stigmas about assault and rape culture.

The message being sent by SlutWalk participants is that no matter what someone is wearing, sexual assault is not okay. The march, which will include remarks from those who have personal experience will assault, is aimed at making it easier for victims to talk about their traumas.

Tuesday’s walk will take place at the Marriott Library Plaza at 12:30 p.m. The event will include a keynote speech from Turner Bitton, Executive Director of the Utah Coalition Against Sexual Assault. Prior to the march, there will be a poster-making session outside of the library at 11:30 a.m.

This piece originally appeared in The Daily Utah Chronicle. Click here to read the original article.