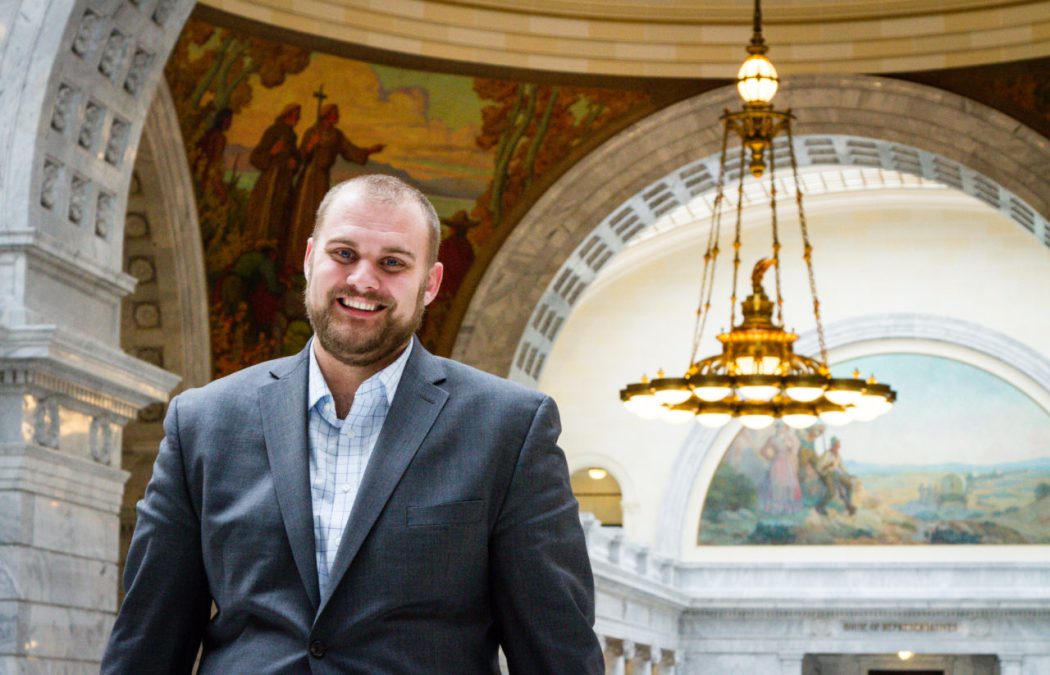 Here at the Chronicle, we’re taking the time to focus on activism and what activism means for our communities and student population. I recently had the opportunity to meet with Utah Coalition Against Sexual Assault (UCASA) Executive, Turner Bitton, for an interview on his success in non-profits and advocacy, and what we can do here at the U to end sexual assault on campus and in our home state.

Q: To start off, I’d like to talk about you — where you’re from, a little bit about your background working with non-profits and just generally what got you to where you are today.

A: I grew up in Western Weber County on a cattle farm. My dad and brother are both law enforcement, so we always grew up talking about politics. My dad was on the planning commission for the little town we grew up in, so I just always had an interest in politics.

I graduated high school and went straight to college — worst thing I ever did. I hate school. So I dropped out. From there I decided to go back and learn some skills, join some political campaigns and do my own thing. Over the course of that I got pretty lucky. I had a lot of mentors and people who invested time in me. And I just started getting involved in things, which escalated. And once you get involved in the non-profit world, it’ll suck you in and keep you involved.

Q: What do you feel are your greatest accomplishments so far?

A: I am very proud of the fact that I’ve led the Drug Policy Project of Utah. We have worked on issues of medical marijuana, drug overdoses and needle exchanges. I have led that organization for three years now as its founding board president. That’s given me a lot of insight into how legislature works, how politics work. I’m very proud of the fact that [we] legalized needle exchanges, so that folks who use injection drugs are able to exchange their dirty needles for clean ones. The goal of that is to reduce HIV and other blood-borne pathogens.

He went on to talk about how facing a less judgmental crowd at these service centers often led to more wrap-around care, like figuring out housing, food and appointments with physicians. He is also Board Chair of the Utah Harm Reduction Coalition, which is working to purchase equipment to test drugs, so that users will know what’s in their drugs and hopefully reduce overdoses.

A: UCASA is the state level federally recognized sexual violence coalition. The federal coalition system evolved out of the Violence Against Women Act of the early 1990’s to identify gaps in services for local domestic violence shelters and sexual violence programs and to look at where victims were being unfairly treated and recognized within the system.

What I’m most excited about with UCASA is that I now have the chance to engage with young men, and men in general, on a level that I don’t think others do, mainly because we share the fact that we’re men. There’s a weird perception that folks have that this is an issue for women and women only. They think that men can’t be victimized sexually. We view men as perpetrators, generally. But that just isn’t the case. And I don’t need a mother, or a sister to be passionate about this issue. I just have to care. And that’s what other men need to realize. You don’t need a reason to occupy this space. We want your voice. We want you to be engaged.

Q: What do you feel are the biggest issues surrounding sexual assault?

A: I think one of the biggest issues is that we, as a society, generally create a space where sex is viewed negatively, and sexuality and relationships are not talked about in a healthy way. So we don’t do the positive role modeling that we should and we don’t have those uncomfortable conversations. I believe fundamentally that there is a fine line between victim blaming and having an honest conversation. And we don’t engage in those conversations because of the perception that we’re going to be attacked for talking about certain things. These are complex issues — issues of sexuality, relationships, marriage — morally, financially and socially for people. If we aren’t’ engaging the public, I don’t think we’re doing the work of primary prevention.

I believe that in one generation we could eliminate sexual violence completely from our society. But it takes that kind of hard conversational investment. And these are difficult concepts, one reason being, because I, like most people, am not totally confident that I haven’t committed sexual violence at some level at some point in my life. We’re all fumbling around. We’re all trying to figure out our own bodies and sexuality, our relationship development, our needs and our wants, and unless we’re having very robust, honest conversations about that, it’s hard to expect someone to know what, for example, sexual coercion looks like.

Q: What would you say you’re doing to implement this primary prevention the way UCASA intends?

A: I would say that getting into schools is very important – high schools, middle schools and even elementary schools — to have these kinds of conversations. Also, we should elevate role models to lift up relationships and showcase equal partnerships.

Q: What can we do, as college students, to help end sexual violence?

A: UCASA just started our Young Emerging Leaders Advisory Council and I would encourage everyone to sign up and get involved in that. I can’t tell individual college students what to do to end sexual violence on campuses. But they can tell me. And that’s why we’ve developed this council. We’re also looking at expanding our “Start By Believing,” campaign. Basically what that says is when a victim discloses to you that they’ve been assaulted, the best thing you can do for them is believe them. It isn’t your job to determine what happened. It’s just your job to support them and be there for them without stigmatizing them as broken, damaged people because they are anything but those things. They are strong, inspirational individuals.