If knowledge is power, then ignorance is STDs 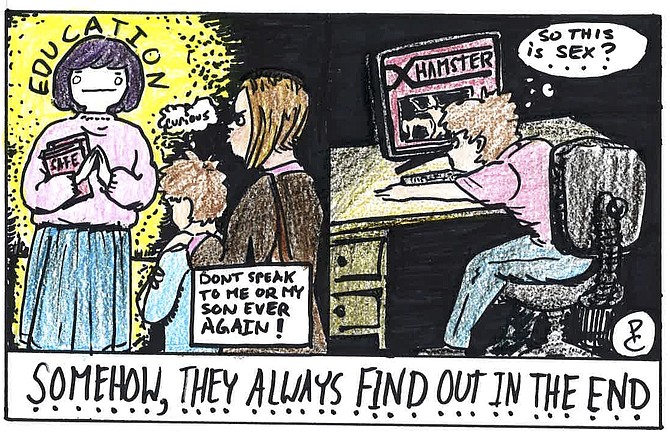 To begin, one member emphasized that abstinence-only education perpetuates silence and shame on the topic of sex, even though many are obsessed with it. Young people still have sex in Utah — they just don’t talk about it.

In 2010, 36 percent of all Utah pregnancies were unintended, according to the Guttmacher Institute. Unplanned pregnancy can occur with protected sex, but it’s more likely that a majority of these pregnancies were the result of unprotected sex. Furthermore, states with abstinence-only education (that includes Utah) have higher rates of STDs, according to the Center for Disease Control.

A lack of education spreads further misconceptions, especially concerning consent. For example, in a Utah case where a young girl was raped by an acquaintance, a primary reason for the defendant’s acquittal was that the jury did not believe the victim could be raped by someone she knew, according to Utah County prosecutor Lauren Hunt for the Salt Lake Tribune. This is truly incredible, considering 82 percent of rape victims were assaulted by someone they knew, according to the Department of Justice. Perhaps proper education on consent could prevent this kind of ignorance-based injustice.

Furthermore, the Executive Director of the Utah Coalition Against Sexual Assault described experiences in which victims he worked with couldn’t label their sexual assault as assault or even say the word “vagina.” This illustrates the concept of shame and refusal to talk about sex, even when it is necessary to do so.

Another point the Board discussed was whether sex ed should be left up to parents (many legislators promoting abstinence-only curricula believe it should). One member said schools are responsible for molding informed citizens, and in that respect, abstinence-only sex ed fails. Other members concurred schools must create strong learning foundations and fill in gaps left by parents. Some members said they know people whose parents never talked to them about it. One highlighted the experience of a young girl who started menstruating without knowing what it was and thought she was dying. This is just one instance in which parents neglected to do the job Utah policymakers expect them to.

Many Board members also asserted that LGBTQ+ representation in sex ed is critical. Last October, Equality Utah — a non-profit organization that works to secure rights for LGBTQ+ Utahns — sued the state’s education office on behalf of three minors over laws prohibiting discussion of homosexuality in public schools. These minors were bullied for their sexualities and genders, and they were discouraged from asking questions about LGBTQ+ issues in health classes. One Board member said LGBTQ+ youth have a right to education, too. Others said it is especially important they be taught about contraceptives because homosexual/bisexual men accounted for 63 percent of HIV infections in 2010, according to the CDC. This percentage perpetuates a fear of homosexuality, when instead it should be an opportunity to educate youth about the importance of contraceptives.

Abstinence-only education is detrimental, correlating with higher STD and pregnancy rates as well as misconceptions about sex and consent. Students of all sexualities and genders deserve comprehensive sexual education. We must face the truth: silence is deadly. It is time to shed antiquated mindsets, accept that sex is a part of life and ensure it is practiced safely.

The opinions expressed above are the collective perspective of the University Journal Editorial Board. The editorial board meets Fridays at 4 p.m. in Room 176C of the Sharwan Smith Student Center. Readers are welcome to comment online at suunews.com or on Facebook.

This article originally appeared on suunews.com. Click here to read the original article.