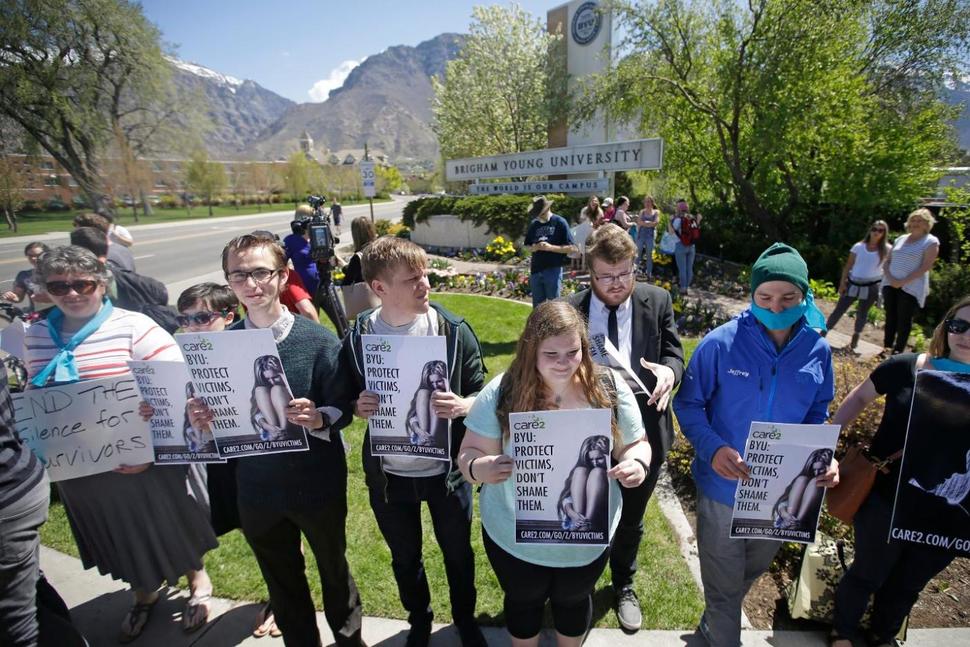 PROVO, Utah (AP) — Madeline MacDonald says she was an 18-year-old freshman at Brigham Young University when she was sexually assaulted by a man she met on an online dating site.

She reported the crime to the school's Title IX office. That same day, she says, BYU's honor code office received a copy of the report, triggering an investigation into whether MacDonald had violated the Mormon school's strict code of behavior, which bans premarital sex and drinking, among other things.

Now MacDonald is among many students and others, including a Utah prosecutor, who are questioning BYU's practice of investigating accusers, saying it could discourage women from reporting sexual violence and hinder criminal cases.

Some have started an online petition drive calling on the university to give victims immunity from honor code violations committed in the lead-up to a sexual assault.

This week, BYU announced that in light of such concerns, the school will re-evaluate the practice and consider changes.

"I hope we have a system that people feel they can trust, particularly again the victims of sexual assault," BYU President Kevin Worthen said in a video released Wednesday. "And that we have one that creates an environment in which we minimize the number of sexual assaults on campus."

BYU would not say how many students who complained of sexual violence have been investigated by the honor code office or whether any of them have been punished.

In MacDonald's case, she said BYU eventually called to tell her she hadn't violated the code. But she said she was made to feel guilty by the university.

Mary Koss, a public health professor at the University of Arizona who is an expert on sexual assault, questioned whether BYU is fulfilling its legal duty under federal Title IX to support victims of sexual violence.

"The students agreed to be governed by that honor code when they came there," she said. "But they cannot put things in their contract to students that are in violation of federal guidelines on civil rights."

Alana Kindness, executive director of the Utah Coalition Against Sexual Assault, warned: "The impact of that practice is that students at BYU who are sexually assaulted will not report that assault."

U.S. Education Department spokeswoman Dorie Nolt would not comment directly on BYU. But she said in an email that "schools should consider whether their disciplinary policies have a chilling effect on victims' or other students' reporting of sexual violence offenses."

Some U.S. colleges with codes of conduct have an immunity clause under which they investigate and punish only the perpetrator of the more severe offense.

On Wednesday, dozens of BYU students, alumni and others gathered at the campus entrance to present petition signatures to BYU's president. Many wore teal bands on their arms and mouths to signify sexual assault awareness and held signs that read "BYU: Protect victims, don't shame them."

"There is no honor in this archaic code," said protester Brooke Swallow-Fenton, who added that investigations of accusers have been going on for years at BYU.

The petition drive was started last week by Madi Barney, a 20-year-old BYU student who says that she, too, was sexually assaulted and now faces an honor code investigation.

Barney said that she was raped in her apartment last September by a man she met at a gym. A suspect was arrested and is awaiting trial. Barney said she has been informed by the university that until the honor code investigation has been completed, she cannot sign up for any more classes after this semester.

She has filed a Title IX sex-discrimination complaint against BYU with the Education Department's Office of Civil Rights.

The university would not comment on the case, citing federal privacy law. The Associated Press doesn't normally identify possible victims of sex crimes, but Barney said she wants her name to be used so she can help change the policy.

Craig Johnson, the Utah County prosecutor assigned to the case, said the criminal investigation is being hindered by BYU's insistence on determining if Barney broke school rules. He said his focus has been pulled away from the case because of worries Barney will move home to California and refuse to take part in hearings and interviews.

"How excited is she really going to be to come back to Utah where she was raped and her school kicked her out?" Johnson said.

However, Johnson's bosses in the Utah County Attorney's Office said in a statement that BYU has not harmed the case.

This piece originally appeared on us news.com. Click here to read the original article.