Are there ‘two sides to sexual assault?’ YAF says yes, UCASA says no 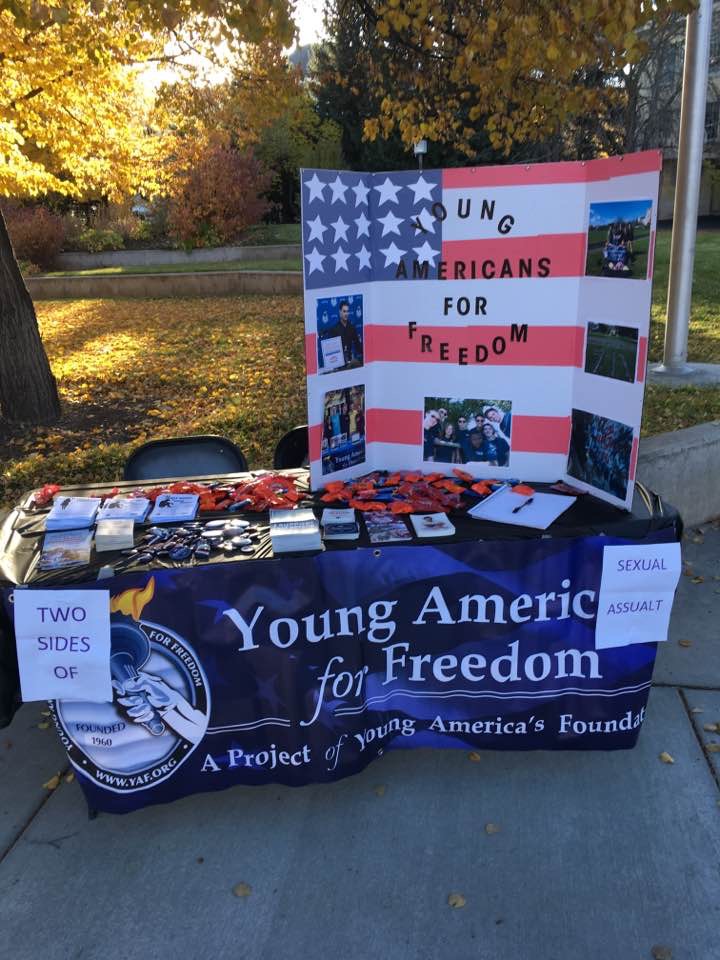 As new accusations continue to be reported every day — across the world and here at Utah State University — leaders of an on-campus club have urged caution against jumping to conclusions regarding sexual assault.

During the fall 2017 semester, a politically conservative club distributed flyers on USU’s Logan campus advocating for people who, according to the flyer, were “falsely accused of sexual assault.”

While Cripe acknowledged sexual assault as a major problem that deserves attention, she said it’s important to acknowledge that men’s lives are sometimes ruined by being falsely accused of sexual assault.

Turner Bitton, the executive director of the Utah Coalition Against Sexual Assault, said this message may actually discourage victims from reporting.

“Every time a survivor sees something like ‘falsely accused’ or ‘liar,’” he said, “it puts an icy chill on our efforts to get folks to come forward who have been victimized by sexual assault.”

Bitton also expressed concern over the statistics cited on the YAF flyer. It cites data from an academic study claiming that 2 to 10 percent of sexual assault reports are false, and that more than 40 percent are unsubstantiated.

“They’re essentially indicating that they believe up to 40 percent are false accusations,” he said, “which is ‘provably false,’ to use their language.”

According to the USU Department of Public Safety’s 2017 campus security report, of all crimes reported on-campus from 2014 to 2016 only two of 84 were declared unfounded, meaning they were “found to be false or baseless” by law enforcement officials. This statistic does not include arrests for drug, alcohol or firearm possession.

While Bitton acknowledged the 2 to 10 percent figure is technically correct according to the study, he said the number of false reports is often inflated because different states and law enforcement entities have different ways of categorizing and defining false accusations. Some may classify a lack of sufficient evidence as a false report, while others may do the same if the survivor chooses not to testify in court.

“These statistics that basically reinforce the societal narrative that people who accuse others of sexual misconduct are lying,” he said. “It sends an icy message through the community that if you come forward as a sexual assault survivor, you’re not going to be believed.”

Bitton said the coalition has a campaign called “Start by Believing,” which promotes the idea that if someone discloses to you that they were the victim of sexual assault, “your only job is to start by believing.”

“The legal system says innocent until proven guilty,” Jackson said. “We like to give people presumption of innocence until there’s compelling evidence, one way or the other.”

Jackson and Cripe also said college campuses have a problem of not giving the accused parties due process.

“Even if falsely accused,” their flyer reads, “universities often take disciplinary action without granting you your constitutional rights to due process.”

Bitton, however, said this is not the case, and that universities are required by law to represent both students – the complainant and the respondent – equally in all investigations.

“I can speak to my personal experience with Utah State,” Bitton said, “that the school is very committed to representing the rights of both people.”

Cripe said the club’s flyers were approved by the university to be distributed and placed on the information desk in the Taggart Student Center, but they did receive some backlash on Facebook when they posted the images. She was fine with that though, and said she is willing to have an open conversation about it with anyone.

“If we had been denying that women are sexually assaulted, then you would have fair grounds to be a bit more defensive,” she said. “But to pretend like there isn’t a problem with men being falsely accused of sexual assault is not fair to the question.”

While the issue of sexual assault has stirred up some controversy, it is not the club’s main focus. They promote traditional values, conservatism and capitalism. Their meetings are held every Thursday at 6:30 p.m. in room 335 of the TSC, and are open to the public.

The “very best” prevention method, Bitton said, is affirmative consent and constant communication in sexual and dating relationships. He also said a “consistent ethic of consent” needs to develop in all relationships.

However, Bitton said the biggest responsibility for prevention falls on a specific group of people.

This piece first appeared in The Utah Statesman. Click here to read the original article.