#MeToo: Utah women take to social media to share their stories of sexual harassment and assault

Amanda Rock took to Twitter late Monday morning and typed the same two words that many women and men across the country posted online as they shared their stories of sexual harassment or assault: “Me too.”

The Salt Lake City woman added: “I’m still so mad at myself for not saying anything.”

There was some hesitation, she said, in adding her voice to the impromptu social media movement that was sparked Sunday by actress Alyssa Milano, who posted on Twitter with an idea that if all women who have been sexually harassed or assaulted wrote “Me too” as a social media status, it would give people a sense of the magnitude of the problem. 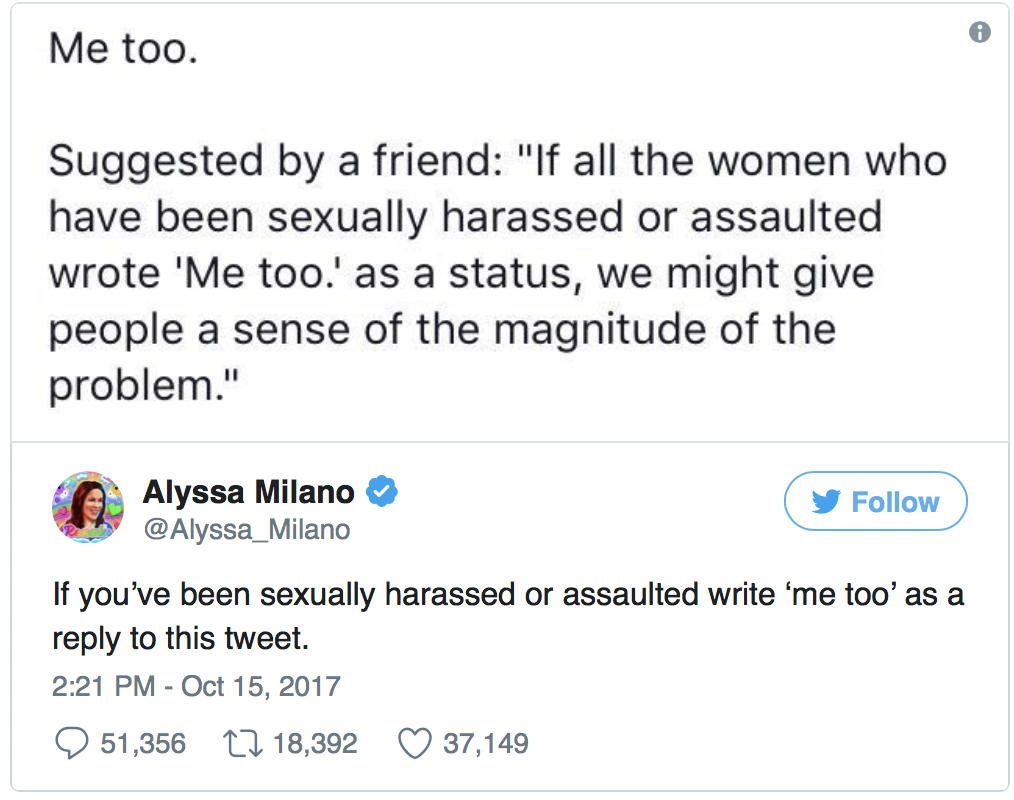 But Rock said Monday that she wanted to share her own story to support other women who have posted.

After posting #metoo on Twitter, Rock told The Tribune that she was sexually harassed by a man on a TRAX train who rubbed himself against her while making small talk. Shocked, she didn’t know what to do — she never asked him to stop, she never called the cops.

Rock was one of thousands who posted their #metoo experience in response to Milano’s call to action. Within hours of the actress’s Sunday tweet, “Me too” began appearing in droves, and quickly started trending on Twitter and Facebook. By Monday morning, the hashtag #metoo was the top trending phrase on Twitter in Salt Lake City.

On social media, some Utahns wrote simply, “Me too.” Others wrote #metoo, but added: “I don’t ever want to talk about it.”

Still others shared their specific stories of sexual harassment or assault. One woman was 18. Another was assaulted as a child. Another woman recounted how just two days ago, two men pulled up next to her car in downtown Salt Lake City and yelled vulgarities at her.

There was that time in junior high. High school. At her job. In a basement. On the street.

And the response from many? You are not alone. It happened to me, too.

The actress’s tweet-turned-social-media-movement has done what it intended: it showed how commonplace sexual assault and harassment are.

One Utah woman, who asked to remain anonymous, told The Tribune on Monday that she was groped under her shirt by a high-power board member years ago. She shared her #metoo story to show the public how prevalent sexual assault and harassment is.

“Those who perpetrate sexual assault are our friends, our neighbors, our family members,” she said. “There is a harasser or assaulter behind every #metoo you read.”

Toni Smith, of Salt Lake City, wrote on Twitter that she has been harassed and molested by men, and was also raped by women. She told The Tribune she wasn’t surprised with the outpouring of posts from other women — in fact, she thought there would be more.

The reason she posted her own story?

“This is me too,” she said. “This is not just some random person you’ve never heard of. It becomes very personal, and when things become personal, people care about them.”

Turner Bitton, executive director of the Utah Coalition Against Sexual Assault (UCASA), said Monday that the movement has been empowering to survivors of sexual abuse.

“A lot of times,” Bitton said, “just disclosing that you have experienced violence, that can be a healing moment in and of itself.”

UCASA has heard from service providers across the state who have said they’ve seen an increase in a request for services Monday — likely because of the massive social media campaign.

There’s been an increase in need at the Center for Women and Children in Crisis as well, according to Christine Cagano, who is the sexual assault services coordinator. That increase began about a week ago, she said, as news of decades of sexual abuse allegations emerged against film producer Harvey Weinstein.

“It’s a trigger for everyone,” she said. “Even if you confronted it years ago, just the story in and of itself, just rape and sexual assault in itself, is a trigger. No matter how well you’re doing.”

Cagano said that while the social media movement is powerful, people should still be sensitive to those who don’t want to share their experiences publicly.

Bitton said people often think of sexual assault survivors as broken, sad or hurt. But in working with those survivors, he’s found they are strong and resilient.

“To see them leading the charge out there with this campaign, empowering survivors, and saying this happened to me too — it’s very inspirational,” he said.

Anyone in need of resources can call Utah’s 24-hour Sexual Violence Crisis Line at 1-888-421-1100 or visit UCASA’s website for more information about services in your area.

This piece first appeared in the Salt Lake Tribune. Click here to read the original article.